We saw so many vehicles at the 2015 Los Angeles Auto Show, we had to break them into three separate stories highlighting the fun cars, the sedans, and the utility vehicles.

Here is the first installment, focusing on the fun coupes, convertibles, and sporty cars that will soon be for sale in the United States.

As the first of a new-generation of vehicles built on an all-new platform, the 2017 Alfa Romeo Giulia Quadrifoglio promises to bring race-inspired performance, advanced technologies, seductive Italian style, and an exhilarating driving experience to the premium mid-size sedan segment. Built in Italy, the all-new Giulia is powered by a Ferrari-derived 505-horsepower, 2.9-liter biturbo V-6 promising acceleration from 0 to 60 mph in 3.8 seconds and a top speed of 191 mph, and will arrive in America late in 2016 with a starting MSRP around $70,000.

Fiat brought back its 124 Spider at the Los Angeles Auto Show, nearly 50 years after original introduction. Modeled on the same underpinnings as the popular Mazda Miata, the new Fiat promises the ultimate Italian roadster experience with driving excitement, technology, and safety combined with Fiat's iconic Italian design. Under its hood, the new 2017 Fiat 124 Spider is powered by a 1.4-liter MultiAir Turbo four-cylinder engine, the engine's first application in a rear-wheel-drive vehicle. The engine delivers 160 horsepower and 184 lb.-ft. of torque, and will be available with a six-speed manual transmission or a six-speed automatic transmission when it arrives in dealerships in the summer of 2016.

Ford launched a high-performance hothatch version of its midsize Focus with RS tuning. Already an popular consumer hatchback in a competitive class, the sporty 2016 Focus RS receives enhanced aerodynamics and performance tuning, improved brakes, and better cooling for the 350-horsepower, 2.3-liter, four-cylinder turbocharged EcoBoost engine. With an MSRP starting in the mid-$30,000’s, the spirited Focus RS promises to be the top-of-the-line performance car for most Ford customers. 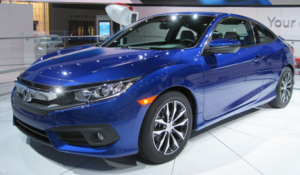 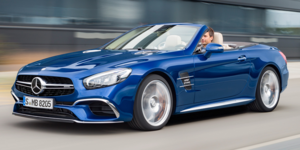 Typical of Mercedes-Benz, the C-Class offers looks that thrill with the performance to match thanks to 2.0-liter, four-cylinder engine delivering 241 hp and 273 lb.-ft. of torque. Since its launch in 2011, the C-Class has been Mercedes-AMG's best-selling model, and the new AMG C63 takes its performance even further with additional technical modifications and visual distinctiveness. Underhood, the AMG C63 Coupe is powered by a high-performance 4.0-liter V-8 biturbo engine boasting 469 horsepower in standard trim or 503 hp in the C63 S model.

The new S-Class Cabriolet is the fourth variant of the current S-Class family in the U.S. market and the first open-top flagship four-seater from Mercedes-Benz since 1971. Who can argue with topless comfort for four, along with a 5.5-liter V-8 biturbo engine offering an output of 577 hp and peak torque of 664 lb-ft, along with accleration from 0 to 60 mph in 3.9 seconds? 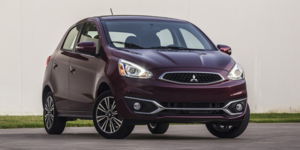 Mitsubishi shared a re-designed 2017 Mirage with sportier looks outside, and featuring an available 300-watt Rockford Fosgate audio system as well as Android Auto and Apple CarPlay inside, making it the first Mitsubishi vehicle to get this popular infotainment system in the U.S.

Porsche has added a new sports car for amateur and club racing to its motorsport fleet with the debut of its Cayman GT4 Clubsport. The 385-horsepower, 3.8-liter flat-six mid-engine entry-level racer is based on the successful street-legal Cayman GT4 sports car, but is a virtually turn-key racecar that's not legal for road use. On sale to American motorsport enthusiasts now, the new Cayman GT4 Clubsport racecar starts at $165,000.

Porsche also showcased a new 911 Targa 4 model. Initially designed for the US market in 1965 as a “safety convertible," the Targa has developed into a showcase model of the 911 model series; with its fully automatic Targa top and  traditional wide rollover protection bar, the 911 Targa combines classic design with state-of-the-art technology. The new 911 Targa 4 promises a cultivated but high-performance experience with three powerful and efficient 3.0-liter six-cylinder biturbo engines and an advanced all-wheel-drive system.

Answering a question nobody asked, Land Rover launched its 2017  Range Rover Evoque Convertible calling it "a convertible for all seasons." Styled with striking lines, the muscular cabriolet adds another dimension to the Range Rover Evoque name thanks to a power-operated z-folding top that opens at the touch of a button at speeds of up to 29 mph. Underneath its edgy sheetmetal, the convertible Evoque features Range Rover's rugged underpinnings and a 240-horsepower 2.0-liter turbocharged four-cylinder engine mated to a nine-speed powertrain capable of accelerating from 0 to 60 mph in 7 seconds and a top speed of 135 mph.

Volkswagen brought two special editions of its popular Beetle to the Los Angeles Auto Show. The Beetle Denim convertible pays homage to the 1970s Jeans Bug, and will be limited to 2000 units in two exterior color options -- Pure White or Stonewashed Blue -- with a convertible top in a brand-new textured fabric that resembles dark blue denim. Drawing inspiration from classic Baja Bugs, the Volkswagen Dune has a more aggressive appearance than the rest of the Beetle range, and is powered by a 1.8-liter direct-injection and turbocharged TSI four-cylinder engine, offering 170 horsepower and 184 lb.-ft. of torque, mated to a six-speed automatic transmission. The Dune coupe will go on sale early in 2016, while a  convertible version will arrive later in the year.

Keep an eye out for upcoming Los Angeles Auto Show coverage featuring a collection of new sedans, and another focused on utility vehicles.

Posted by Brandy S at 06:00:00 AM in Around the Auto World, Car and Truck Reviews