« Ladies: Do You Know What Your Car Needs? Discussing The Importance Of Following A Regular Maintenance Schedule | Main | A Ladies’ Look at Mila Kunis’ 2014 Fiat 500 Lounge Edition Cabrio »

It’s no secret that I’m a fan of the Ford Fiesta, having preordered my 2011 Fiesta sedan before they even arrived at Ford dealerships. It’s four years old now, and Ford has refreshed the fun Fiesta for the 2014 model year, in a midcycle makeover offering styling changes, improved technology, and a brand-new super-fuel-efficient engine choice.

Ford originally launched its feisty little Fiesta in four- and five-door body styles with one engine: a 120-horsepower/1.6-liter inline four-cylinder engine mated to the buyer’s choice of five-speed automatic or six-speed PowerShift transmission and rated for fuel economy as high as 29 mpg city/40 mpg highway/33 mpg combined. For the record, my average tank of gas with a fair mix of both city and highway miles shows around 32 miles per gallon.

The sporty new body style now features trim that looks more like other cars in Ford’s lineup. Up front, the 2014 Fiesta subcompact has changed its grille shape and lost its lightpipes, exchanging them for a more muscular fascia and round foglamps that better match the aggressive new face of Ford.

Inside, the 2014 Ford Fiesta now receives Ford’s MyKey programmability, which enables parents (in particular) to limit their teenagers’ exposure to risk at the wheel and encourages safer driving. The system allows owners to configure maximum speed and audio volume limits, mutes audio until seat belts are fastened, and prevents drivers from disabling safety controls.

The new 2014 Fiesta also offers a new and improved SYNC system with a MyFord Touch 6.5-inch screen, but that upscale option is not available on the SFE trim. However, even in SFE trim, the new Fiesta continues to offer its SYNC AppLink capabilities pioneered on the first Fiesta, which allows drivers to access and control Ford-approved smartphone apps with voice commands and vehicle controls while on the go, helping them keep their hands on the wheel and eyes on the road. Turn-by-turn navigation remains part of SYNC Services. Steering wheel fingertip buttons for SYNC, radio, and cellphone controls have also been improved.

What’s New Under The Hood Of The Super-Fuel-Efficient 2014 Ford Fiesta?

The newest Fiesta should start appearing in dealerships soon badged as the Fiesta SFE model, which includes lightweight wheels, low-rolling resistance tires, and a few aerodynamic upgrades. This configuration offers no automatic option, as the manual transmission contributes to this car’s super-high mileage; however, a hill-hold feature that controls vehicle roll on inclines will comfort those who haven’t mastered the coordinated clutch/brake-to-gas/handbrake roll-off that worries neophyte shifters. 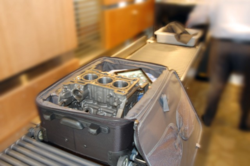 Ford’s little three-cylinder engine is so small, the 52-pound engine block can actually fit into an TSA-approved carryon bag! While the diminutive size of the 1.0-liter EcoBoost saves cash at the pump, it doesn’t hold anything back on the road. At 123 horsepower for each liter of engine displacement (the engine’s size), the turbocharged EcoBoost delivers more power for its size than a Lamborghini Aventador (at 108 horsepower per liter). Drive it like you stole it, and you’ll be surprised by its spirited performance. Other road testers have reported 0 to 60 mph acceleration times of about 9 seconds. We noticed some turbo lag, but it was not problematic.

Already selected for both the Popular Mechanics 2012 Breakthrough Award and Engine Technology International’s International Engine of the Year award in Europe, the new engine has been EPA-rated to deliver 32 mpg city, 45 mpg highway, and 37 mpg combined. Early in March I had an opportunity to drive the brand-new American model around the streets and highways near Irvine, California; and last year I

enjoyed a week behind the wheel of an imported European model, which is when we shot the photos of the blue Fiesta in this article. Having spent plenty of time driving this carlet, I can assure you these will be easy numbers to meet; if you have a gentle throttle foot, and consistently cruise near recommended highway speeds, it’s a no-brainer to exceed 40 mpg. On the other hand, if you choose to enjoy its spirited performance, city-based fuel economy could loiter around 30 mpg -- which is still pretty good fuel economy for the torquey fun the engine provides.

What Does The New 2014 Ford Fiesta SFE Cost?

Photos by Scott Harris, except for engine block in luggage courtesy of Ford Media.

Posted by Brandy S at 08:00:00 AM in Around the Auto World, Car and Truck Reviews

Listed below are links to weblogs that reference Ford’s New Super-Fuel-Efficient Fiesta Is Small But Mighty :