Ladies Will Love The 2015 Volkswagen Golf For Its Sporty Fun, And Practical Safety

The seventh-generation Volkswagen Golf has been redesigned from the ground up. The 2015 Volkswagen Golf is slightly bigger and more spacious than the model it replaced, but is lighter and more fuel-efficient. Popular with Volkswagen fans, the 2015 Golf is one hot little hatchback offering plenty of fun, sporty performance, and practical features.

The 2015 Golf will offer three distinct models. The base model Golf will be powered by a 170-horsepower/1.8-liter turbocharged, direct-injection four-cylinder TSI® engine, built at a brand-new plant in Silao, Mexico, that is part of Volkswagen’s ongoing $5 billion investment in the North American market. The Golf TDI Clean Diesel model will be powered by a new 150-horsepower/2.0-liter common-rail, turbocharged, direct-injection diesel engine and promises excellent fuel economy. And the sporty GTI will also receive a new Silao-built EA888 2.0-liter turbocharged TSI engine boasting 210 horsepower. All are offered with a choice of six-speed manual or six-speed dual-clutch automatic transmission.

Outside, the new Golf has a strong character line that flows all the way around the car beneath the door handles, being interrupted only by the wheel arches. The line in the side of the car is picked up by the chrome bars in the radiator grille and in the white lateral bars of the taillight clusters. The line is designed to lower the car’s visual center of gravity and give it a more solid stance on the road. There’s a second line along the shoulder that runs under the mirrors from the headlamps back to the rear side window, which emphasizes the car’s larger proportions.

Every element of the interior has also been redeveloped and redesigned. The wide center console is now oriented towards the driver, a feature that’s more typical of premium vehicles rather than compacts. In the middle of the console, beneath the hazard warning light switch, is the infotainment screen. For the first time, Volkswagen is using touchscreens with a proximity sensor, allowing drivers to change functions with a swipe of the hand, just like a smartphone. Even the base radio has a 5.8-inch touchscreen. The new navigation systems are DVD-based with a 3D display.

Located beneath the infotainment module are simple, well laid-out controls for the climate control system. Beneath it, the lower section of the center console has a stowage compartment that integrates the Media Device Interface/iPod® cable. The new Golf has improved stowage all around the cabin, with a sliding tray underneath the driver’s seat (manual seats only), six cupholders (counting the pair integrated into the rear armrest), and a large glovebox that houses the CD changer and SD-card slot.

The whole interior is finished in high-quality materials including soft-touch plastics, along with chrome, aluminum, and piano black surfaces that have a premium feel and look. The cruise control is now operated though steering wheel buttons rather than the column stalk. New white lighting for the buttons and switches underscores the interior’s upscale look and feel.

The GTI, as with previous model years, has a number of interior differences to the Golf. The interior is highlighted by sport seats with distinctive GTI plaid pattern, a black headliner, and red ambient lighting. The car also offers classic GTI features such as a sport steering wheel, GTI shifter knob grip and instrument cluster, special trim inserts, and stainless-steel pedals and foot rest.

As for safety, the new Golf boasts six standard airbags, as well as a new system called Automatic Post-Collision Braking System. The new system automatically brakes the vehicle when it is involved in a collision in order to help reduce residual kinetic energy. The system is triggered when the airbag sensors detect a primary collision and it is limited to a maximum retardation rate of 0.6g by the electronic stability control (ESC) unit.

Beyond these technologies, all Volkswagen models also feature an Intelligent Crash Response System (ICRS) designed to help keep drivers safe in the event of an accident. If a driver is in a collision where the airbags are deployed and the ICRS is activated, the ICRS will unlock all the doors, disable the fuel pump, and turn on the hazard lights. All of this is triggered automatically to help look after occupants after a collision has occurred. 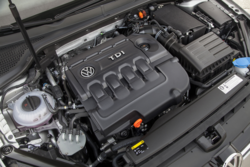 The seventh-generation Golf will be built at Volkswagen’s Puebla, Mexico factory and is expected to go on sale by summer, 2014. For drivers interested in the best fuel economy, today's Golf TDI offers up to 43 mpg -- and the new one will likely improve on that. Pricing has not yet been announced, but we expect it will be similar to the cost of current versions: The current-gen Golf starts around $18,500, while diesel models and the GTI start around $25,000.

Find out more about Volkswagen Safety Technology in a companion piece published at BlogHer.

Listed below are links to weblogs that reference Ladies Will Love The 2015 Volkswagen Golf For Its Sporty Fun, And Practical Safety :